David Ramey, his family and staff were tremendously welcoming.  Hospitality is one of those seemingly inconsequential things, but a little goes a long way…  This visit was about more than the wine and more than the education.  I will remember the interview, because of the way my wife and I were greeted, made to feel at home and offered a real opportunity to know the winery, its product and the people.  I came away from the nearly two hours spent together, with a rather in-depth understanding of the philosophy and style of winemaking at Ramey Cellars.

David has been working in wine production for decades and today he is one of the most well-respected elder statesman of the Northern California Wine Industry.  He received his MS in Enology from UC Davis in 1979, before it had developed its reputation as one of the leading wine science institutions in the world.  David then did his harvest internships with Jean-Pierre Moueix in Pomerol (Petrus) and later Lindemans in Australia.  His career began with a position at Simi Winery, where he would become winemaker, as with Matanzas Creek, Chalk Hill, Dominus and Rudd later, before starting Ramey Cellars.  David leverages almost 40 years experience in producing premium and ultra-premium wines in the product he brings to market today.

David and I discussed many winemaking strategies.  He helped me to understand how a consumate winemaker can begin with a vision and use it to drive the final product.  I found his viewpoint fascinating. Let me provide a peek into contrasting David’s approach with current trends…

Younger winemakers looking to make premium wines seem to be gravitating towards small production estate wineries.  They are trying to emulate the classic “winegrower” concept that is seen often in Europe. I like the word “winegrower”.  It acknowledges the role of terroir, and fruit quality WITH winemaking experience and skill.  As a Sommelier trained in the last five years, this seems to be the current direction formal wine education is taking us.  After speaking with David, I am not so sure this is entirely the correct path.  For those that have been following my blog, in a previous post, I explained the three primary philosophies I have identified in winemaking:  1) Focus on growing the BEST fruit,  2) Focus on the Chemistry,  3) Focus on the winemaking technique (see more at this link: LINK).   David is both feet in with #3.

David works with the viticultural consultant Daniel Roberts to partner with his fruit producers.  He and Daniel source the fruit from several of the oldest farming families in the Napa-Sonoma area, depending on the quality they produce.  This is to ensure he can spend his time focusing on the winemaking, rather than the vineyards.  Initially, I was trying to reconcile this thinking with my training, then I tasted through the wines and it became clear, but more on that later.

Without pulling any punches, David gave me a run-down on fact versus fiction – Ramey style.  In his mind, the current winemaking trends in the area were nothing more than recycled techniques and old-world ideas being introduced again as new.  We walked through a long discussion reviewing them, such as:  extended maceration, automated spray pump-over, extended aging on the lees.  It was hard to argue with his interpretation, after the historical perspective provided.  He also was very dismissive of the “better wine through chemistry” concept, although he does utilize some of the technology.

The success of his approach is completely driven by his vision for the final product.  When you have as much experience as David, deciding how to accommodate vintage variation is a challenge, but not a show-stopper.  In 2011, Napa had late rains and a very cool year causing many vineyards to either fail to fully ripen, or mold. I tasted a few of the Ramey 2011’s and they were very good.  This was unlike some other prestigious Napa estate producers (like Shafer) that did not fair as well in 2011.

A conversation with David is a lesson in winemaking.  Tasting the result is his validation.

The approach is classic and very Old World. The emphasis is on finesse and balance.  The result is exceptionally refined wines.  The red Bordeaux varietals and Chardonnay stand out.  The couple of others seemed a bit awkward.  David focuses on natural yeasts, extended contact with the lees and a soft touch with the wine during production.  He has very traditional ideas about oak aging.  The result is very classically beautiful wines with great mouth-feel and structure.

Ramey Cellars is also very traditional in other ways.  The majority of their production is sold through the 3-Tier Distribution System…  less than 15% is Direct-to-Consumer.  Another major difference from current trends in premium Napa-Sonoma wineries.  Although, they are currently planning to build a Consumer Tasting Room that is due to open in 2017.  Perhaps an indication that wine & spirits distribution has been increasingly ineffective at promoting individual wine labels?

Tasting so many well-made wines was an amazing experience.  I won’t go through each individually, but try to hit on the highlights.

The 2012 Cab Franc was a beautiful surprise, soft and spicy with great lift.  The Pedregal Vineyard Cab was the best of the 2011’s in my opinion.  All of the 2005 Cabs tasted were excellent.  The bottle-age produced a 2005 Oakville Cab that was rich and beautiful, without losing its elegance.  David offers an Old-World approach to his reds, with just enough fruit on the attack to make the wines a fusion of Old and New World wine styles.

If the opportunity arises, try these wines.  Many were very good, but David’s Chardonnays are truly exceptional.  Make the effort to seek them out… if you are interested in sampling what the Napa-Sonoma area can produce when a complete focus on balance and elegance is applied.

I hope I have been able to convey how special the whole experience was and how appreciative I am of having had the opportunity to engage a truly inspired classical winemaker!

(Click on the image below to view a full-size version) 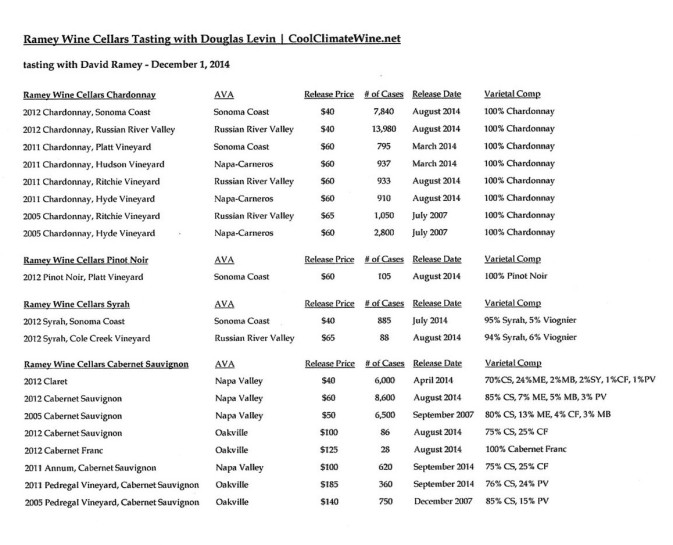